Celebrating a ‘Jubilee for the Earth’

Each year, the ecumenical Season of Creation is celebrated from 1 September (the day of prayer for the care of creation) to 4 October (the feast of St Francis of Assisi as observed by many traditions). This year its theme is “Jubilee for the Earth.”

In a letter to member churches of The Lutheran World Federation (LWF), General Secretary Rev. Dr Martin Junge invited them to participate in this season and make use of the resources offered “to nurture our faithful imagination to restore right, just, and sustainable relations with the Earth and among all species.” 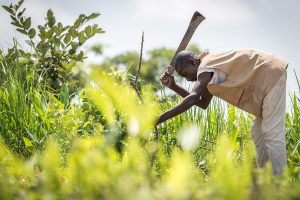 By keeping a strict ratio of how many seeds to sow per hectare, and by sowing Cassava and Groundnut together, refugees near the Ngam refugee camp in Cameroon can both increase harvests and retain soil fertility over a longer time. Photo: LWF/Albin Hillert

The Twelfth Assembly of the LWF affirmed “that the global ecological crisis, including climate change is, human-induced. It is a spiritual matter,” adding that “as people of faith, we are called to live in right relationship with creation and not exhaust it.”

“We invite you to consider the integral relationship between rest for the Earth and ecological, economic, social and political ways of living,” said Chad Rimmer, Program Executive in the LWFs Department for Theology, Mission and Justice, who is a member of the Season of Creation steering committee. “This particular year, the need for just and sustainable systems has been revealed by the far-reaching effects of the global COVID-19 pandemic.”

The 2020 celebration guide provides liturgical resources, Biblical and theological resources, prayers and meditations, and calls to action and advocacy. An ecumenical prayer service, ecologically themed Bible readings, links to eco-theological commentaries and songs are included and can be used in local parishes. Events and news can be shared in social media using the hashtags #SeasonofCreation and #CreationNotForSale.

The LWF and ecumenical partners are conducting an online opening prayer on 1 September which will be youth led.

The closing prayer on 4 October is planned to involve faith leaders, including the LWF General Secretary as well as the LWF Vice-President for Africa Jeannette Ada Epse Maina.

In addition, the LWF’s weekly Communion Prayer will focus on different aspects of the “Jubilee for the Earth”.

“As followers of Christ from around the globe, we share a common role as caretakers of God’s creation,” said Rimmer. “We see that our wellbeing is interwoven with its wellbeing.”