In Season of Creation, ‘no action or initiative is too small to begin’ 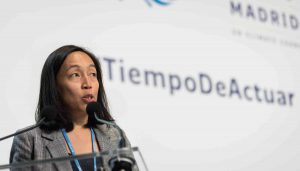 How does “Jubilee for the Earth,” this year’s Season of Creation theme, inspire you?

Peralta: What inspires me most is how the concept of jubilee holds together economic and ecological justice; and how it reveals the truth that our redemption from financial indebtedness and material poverty is inextricably intertwined with the redemption of the land from wanton extraction and exploitation in pursuit of profit and economic growth. And vice versa.

In some parts of the planet, it is currently hurricane or typhoon season and we know that human-induced climate change has meant more frequent and powerful storms that result in the loss of lives and the destruction of livelihoods, especially in small island states in the Caribbean and the Pacific, but also in archipelagic countries such as the Philippines, where I am from. Climate change locks many low-income countries into very costly build-and-rebuild cycles. Often this entails taking on foreign debt. Many climate-vulnerable countries are already indebted ones where debt payments eat up a significant chunk of the national budget. Jubilee calls for the cancellation of the foreign debts of low- and middle-income countries so that communities can recover, adapt, and build resilience to climate change—as well as carve out a different, non-extractive path to ‘development.’

Needless to say, debt cancellation is more urgent than ever because of the COVID-19 pandemic and the economic crisis it has induced. Resources have to be freed up particularly in low-income countries so that governments can respond properly to the health emergency as well as provide adequate social protection for those who have lost their jobs.

How do you relate the concept of jubilee to a just economic system?

Peralta: A key reflection has to do with the question, what is at the root of the climate and larger ecological crisis we face? We burn fossil fuels and extract the Earth’s finite resources – borrowing and taking away from future generations – to feed an insatiable, growth-obsessed economic system. An economic system that is unjust, unsustainable, and enslaving. In a larger sense, jubilee is about liberation from consumerist cultures, anthropocentric world views and greed-based systems that enslave us and the whole planet.

How do we begin to join the jubilee?

Peralta: Jubilee literally means “a ram’s horn.” It’s a horn announcing God’s reign of justice and peace. It’s a horn calling us to come together and to join the pilgrimage for justice and peace, and to build that different world in different ways. Taking action and “walking the talk” despite deep-seated challenges, is what inspires and gives hope. And no action or initiative is too small to begin with. We learned that from a young girl named Greta Thunberg (and there are many more young people like her whose names we do not know), as well as from our indigenous sisters and brothers who, for thousands of years, have lived in harmony with the Earth.

“Seraphim of Zimbabwe: During Season of Creation, ‘we give back to God everything that he has given to us’ ” – WCC interview (29 August 2020)

Learn more about Season of Creation 2020