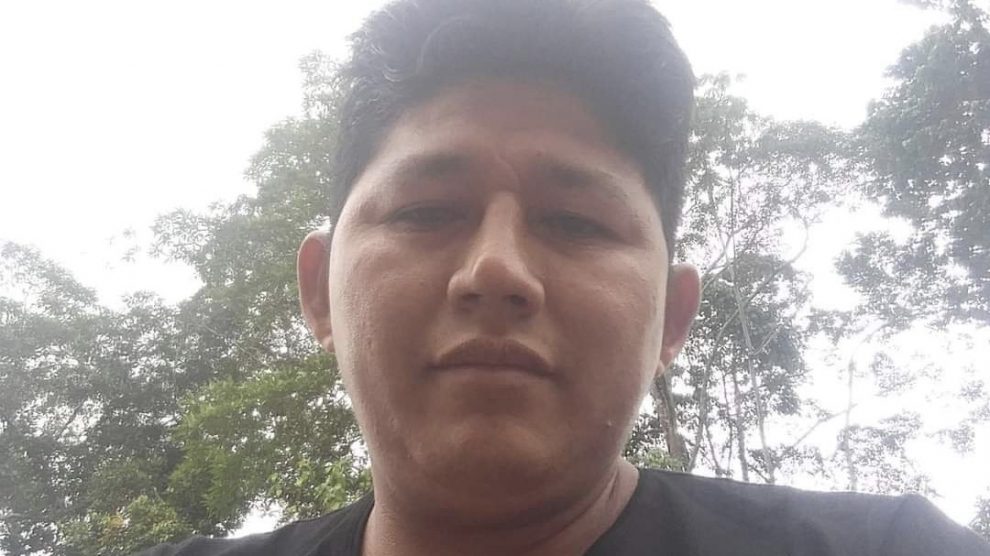 Roberto walked out to tour his forest concession in Madre de Dios, southeastern Peru, and did not return home. On the morning of September 11, his body, with gunshot wounds, was found by his father, Demetrio Pacheco, who is an environmental leader.

His voice was silenced for standing up for the forests in Madre de Dios; for protesting against illegal mining and land invasions. His family had already received several threats because of their activities in defense of our common home, but they never received protection.

The Church of Peru received this news with sorrow and now regrets the lack of measures to guarantee the safety of those who call for the protection of the environment. The Apostolic Vicariate of Puerto Maldonado condemned the murder and in a press release, they reminded the protagonists that “God calls to account for all the blood that has been shed” and that “attacking life is attacking God Himself and, ultimately, oneself”.

The death of Roberto Pacheco Villanueva is just one of the most recent cases. The lack of policies to protect activists who defend nature also affected the lives of three indigenous people from the Kukama Kukamiria ethnic group, who died in a confrontation with the Police during strikes against pollution caused by an oil company and deficient public health services.

The Vicariate knows that indigenous leaders and environmental defenders have been threatened and even killed for raising their voices, so the Vicariate calls on the authorities to ensure that these acts do not remain in impunity.

Peru Node within the Churches and Mining Latin American Network states that the Escazú Agreement would put an end to impunity for crimes against environmental defenders. Article 9 of the Agreement states that “each party shall guarantee a safe and conducive setting in which individuals, groups and organizations that promote and defend human rights in environmental matters can act without threats, restrictions and insecurity.”

On September 26, the period of signatures of the Escazú Agreement was closed and it was ratified by 10 countries in Latin America and the Caribbean. Peru was not one of them. The Congress of this country did not ratify the agreement to which it had already been signatory since 2018. For this reason, the Peruvian Episcopal Conference urges its representatives “to prioritize the defense of life; the protection of rights and of the environment; and integral human development” through the ratification of the Regional Agreement on Access to Information, Public Participation and Access to Justice in Environmental Matters in Latin America and the Caribbean.

It is still possible for Peru to join the Escazú Agreement at the United Nations Headquarters in New York. There is an opportunity for Peru to do so.

As the Global Catholic Climate Movement, we join the Peruvian Church as we acknowledge the life of Roberto Carlos Pacheco Villanueva and all of our sisters and brothers who have embodied the words of Pope Francis on his visit to Puerto Maldonado in 2018: “Love this land, feel it yours. Smell it, listen to it, become amazed by it. Fall in love with this land, Madre de Dios, and commit yourself to protect and defend it. Do not use it as a simple disposable object, but as an actual treasure to enjoy, to be cultivated and to be transmitted to your children.” 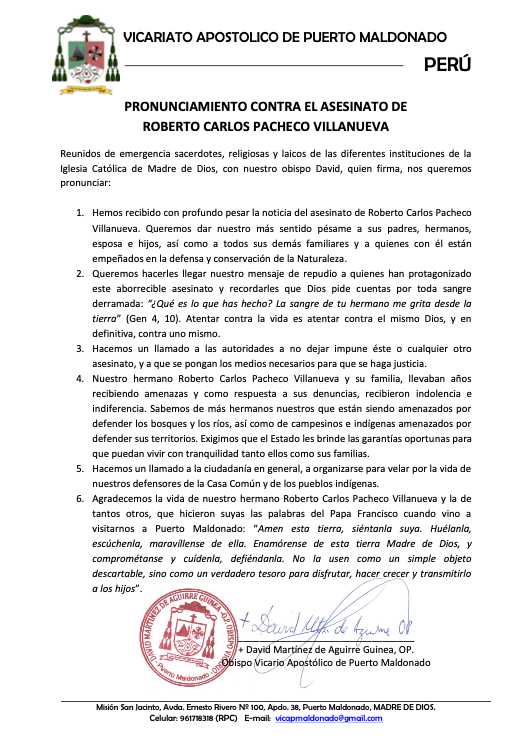