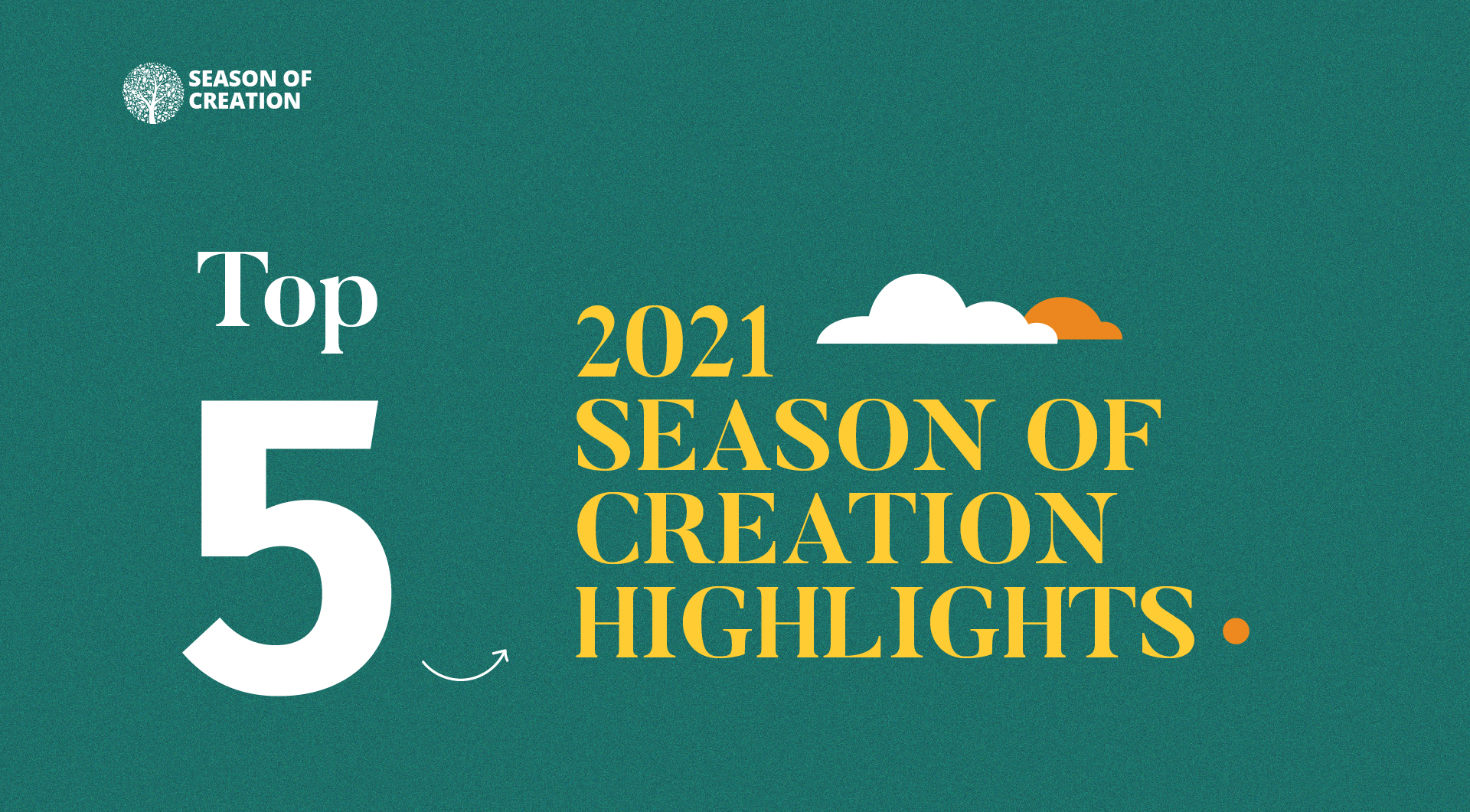 It was a simple yet audacious goal: Create a home for all.

The theme for the 2021 Season of Creation, “A home for all? Renewing the Oikos of God,” saw Christians around the world pray and take action for our common home.

The annual ecumenical celebration, held from 1 September to 4 October, was bookended with historic events that showed the urgency of the climate crisis but also the strength of Christian unity.

In between those historic occasions, hundreds of thousands of Christians worldwide expressed their love for God’s creation in myriad ways, many of which featured how they and their communities were bringing to life the 2021 Season of Creation theme.

Here are the top five highlights of the 2021 Season of Creation. 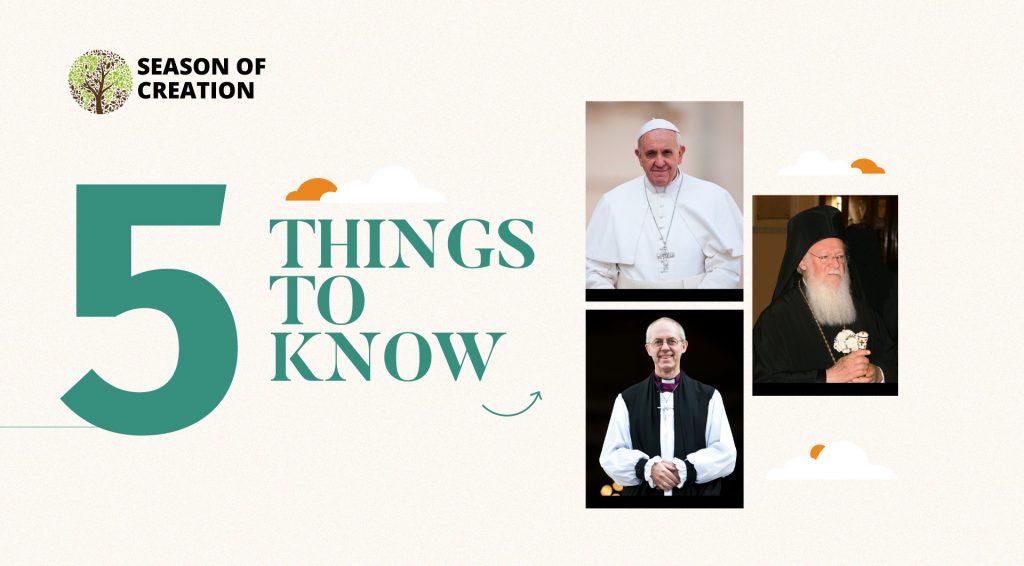 Throughout the season, Christian leaders worldwide showed their prophetic leadership around the climate crisis.

Ahead of the United Nations 26th Climate Change Conference (COP26) in Glasgow, the first-ever message from the three faith leaders called on all Christians and their communities to examine their behavior and pledge “meaningful sacrifices for the sake of the Earth which God has given us.”

For the first time @Pontifex, @EcuPatriarch and I appeal to the heart and mind of every Christian, every believer and every person of good will to hear the cry of the earth and work together to 'choose life' (Dt. 30:19)

To close the season, on 4 October, the Feast Day of St. Francis of Assisi, Christian leaders came together in a powerful new way. More on that to come.

2. Bringing the 2021 Season of Creation theme to life 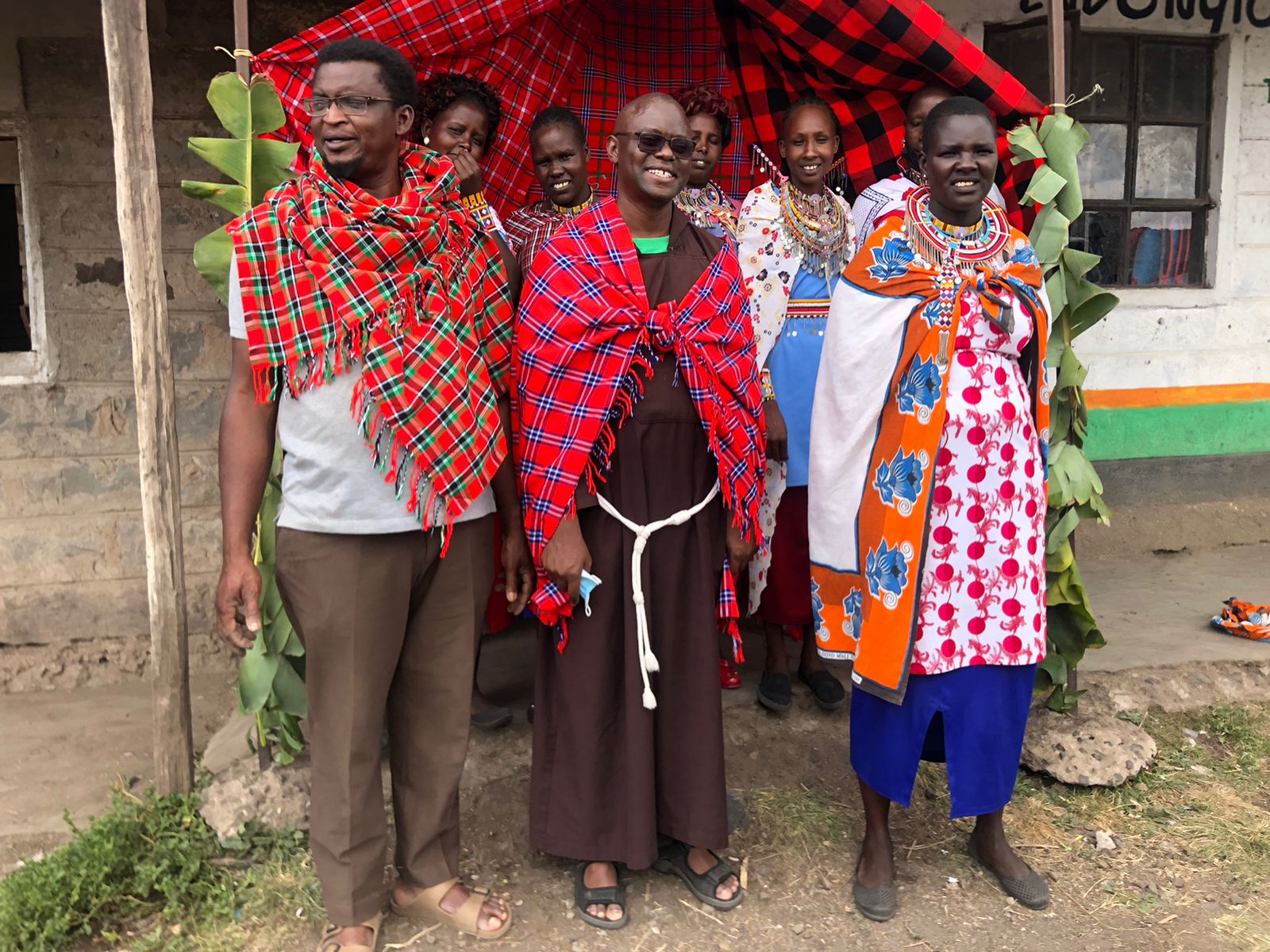 Christians united around the theme of the 2021 Season of Creation.

In the Book of Genesis, Abraham and Sarah opened their tent as a home for three strangers, who turned out to be God’s angels (Genesis 18). By creating a home for all, their act of radical hospitality became a source of great blessing.

WATCH: What is Oikos? Exploring 2021 Season of Creation theme

Just as Abraham and Sarah did, Christians pitched tents for all as a symbol of their radical hospitality and their commitment to safeguarding a place for all creatures in our common home.

This week, the theme for the #SeasonOfCreation is “Oikonome: A just home for all people”.
Proverbs 22 and James 2 clarify that God will champion the cause of the oppressed and that poverty and injustice are deeply linked to our economic behavior and systems.#CreationNotForSale pic.twitter.com/SQ2gWraKXx

In Perugia, Italy, the faithful moved their tent from place to place – from the historical center of the city, to the commercial centers of the suburbs, and to parishes – to share the transformational theme with all people.

Others created a home for all by hosting prayer services, online events, and community clean-ups, which were among the hundreds of events that took place during the ecumenical and global season.

Worldwide, Christians united and prayed a novena to St. Francis of Assisi to celebrate St. Francis, the patron saint of ecology beloved by many Christian denominations.

In Barcelona, Spain, at the Basílica de la Sagrada Família, Christian leaders, along with hundreds of the faithful, recalled our roles as “humble stewards” of God’s creation and encouraged everyone to pursue new lifestyles that help us live in harmony with God’s creation.

Christians also reflected on how we can acknowledge the pain we have inflicted upon our common home while also holding hope for the future.

This week, the theme for the Season of Creation is “A home and a hope for the future”.
The Gospel speaks of the place of children in God’s kingdom: in Mark 10:14-15, Jesus blesses children and states, ‘Let the little children come to me, and do not hinder them.@SeasonCreation pic.twitter.com/dYFS8myHhy

As ELCA Presiding Bishop Rev. Elizabeth A. Eaton said, “We know that healing is possible — for the planet and our communities. We are not too late. The time is now. To us, God is calling; through us, God wants to work a miracle; through our finite and inadequate efforts, God can and will bring about ‘a new heaven and a new earth.’ God provides us with diverse gifts as protectors and guardians of creation.”

3. Advocating ahead of COP26 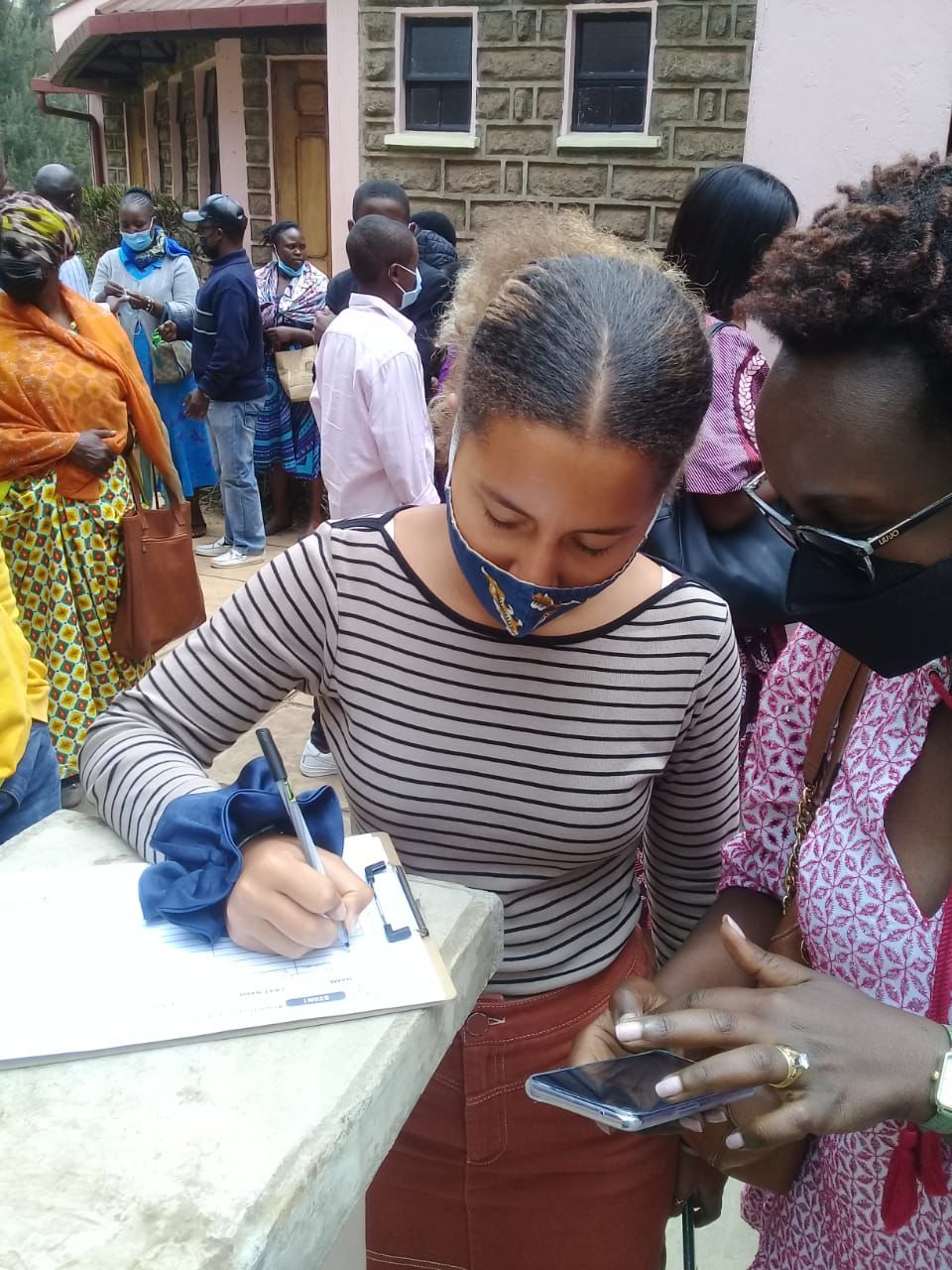 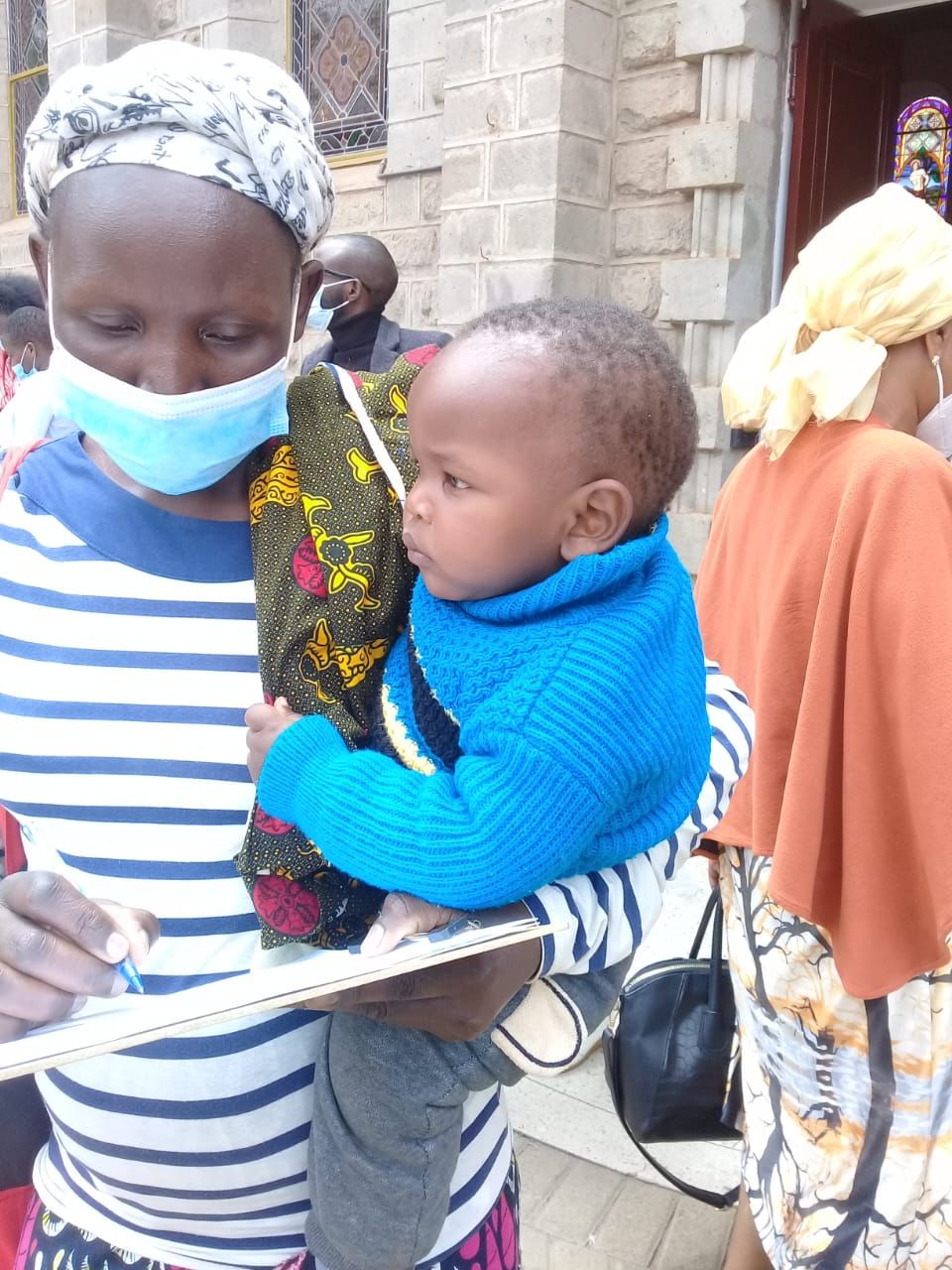 During the Season of Creation, urgent reminders that governments must take drastic action at COP26 were all around us in the form of stronger hurricanes and dangerous wildfires.

We also learned that 23 more species are now extinct in the U.S., a stark reminder that we must take collective action together now. Tens of thousands of Christians advocated for all of God’s creation by signing the “Healthy Planet, Healthy People” petition.

The petition calls on world leaders to set ambitious targets at COP26 that will help all of us protect our common home for generations. Sign the petition today.

In Nairobi, members of a Laudato Si’ Circle shared the petition’s hopeful and urgent message because they wanted to put a face on the climate crisis.

Elsewhere, Christians made concrete commitments meant to help God’s creation and inspire their sisters and brothers to join them in caring for our common home.

From recycling more to walking to work, more than 9,000 #DippyOnTour visitors have made pledges to protect the planet.@bishopnorwich will be taking some of these pledges to @COP26.
What changes can you make to help our world?#TogetherForOurPlanet https://t.co/laW0KGcQXM pic.twitter.com/tkzZvgp9eu

Join this interesting COP26 webinar today at 10 SA (11 EAT) or 1800 SA by following the https://t.co/mSjwr5un2n link on the poster for your choice of tike pic.twitter.com/pHEmpEmcj0

Throughout the continent of Africa, religious leaders called for the “halt to gas and oil exploration in Africa.

“A new era of economic colonialism by fossil fuel companies is well underway. This is supported by self-serving governments,” the leaders wrote.

“Africa is a continent richly blessed with sun and wind. Investment in renewable energy, now the cheapest form of energy worldwide, will create far more jobs and long-term savings. Renewable energy will be generated without the health-damaging pollutants of fossil fuels or global warming that will push the world past a catastrophic 1.5°C increase in temperature.”

But the most special moment might have been the 2021 Season of Creation closing ceremony, which featured young Christian leaders from throughout the world.

The touching ceremony was a time of prayer, music, readings and reflection, and the leaders shared how they and their communities celebrated the 2021 Season of Creation.

Amanda Costa, a United Nations youth ambassador and representative of Evangelicals for Climate, challenged attendees to think about their place in the world and how we all can build a better future for all.

She encouraged everyone to “decolonize our minds, think differently from what is proposed, and ask God to help us think how to move forward. Open your hearts and let the Holy Spirit speak to you.” 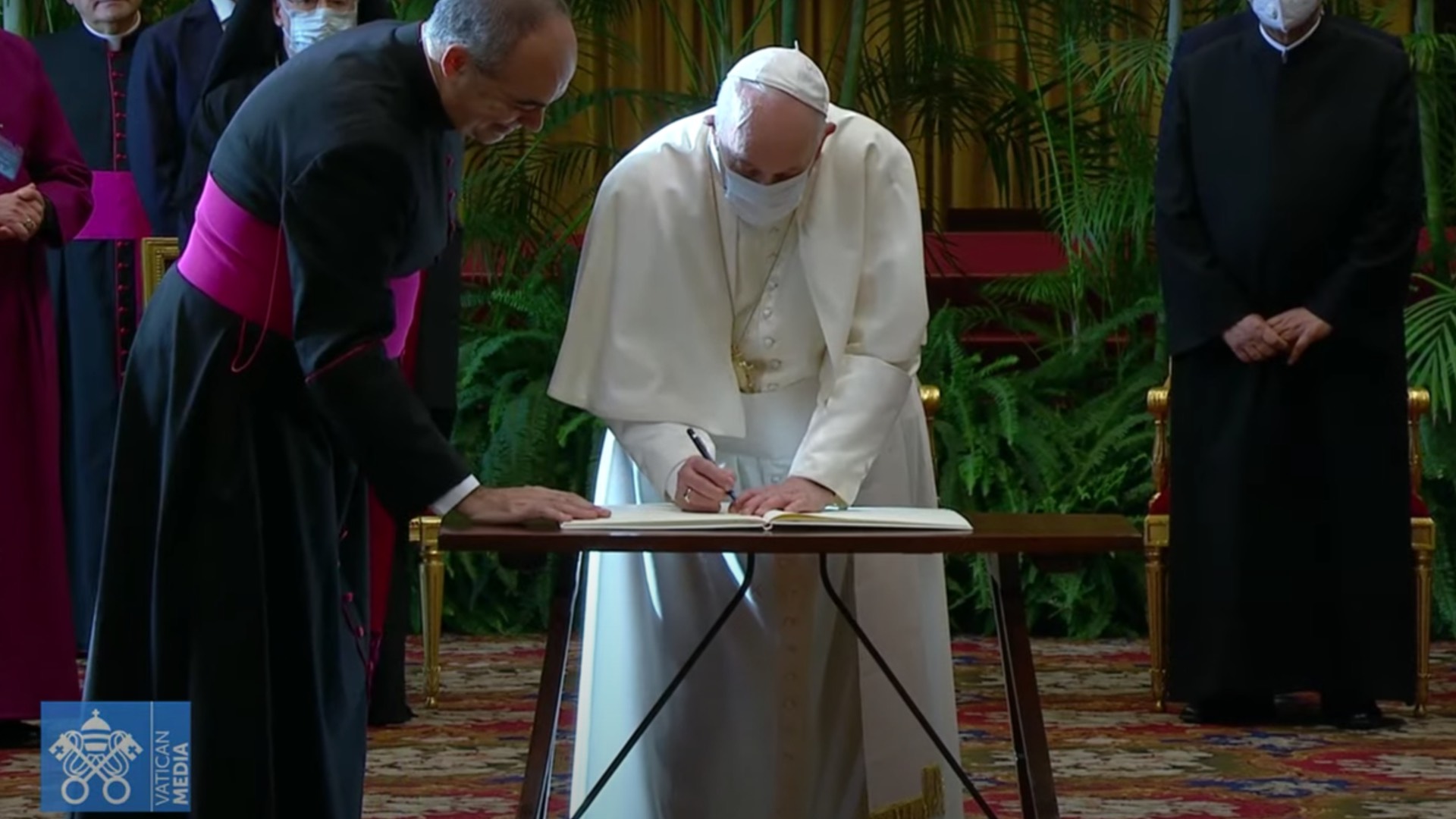 Christian leaders closed the Season of Creation on the Feast Day of St. Francis of Assisi as they began the ecumenical season: united in their call for governments to set ambitious targets at COP26.

About 40 faith leaders signed a joint appeal at the Vatican that called on governments to set ambitious targets at COP26 and take “urgent, radical, and responsible action” with young people and the most vulnerable among us in mind.

Pope Francis, Ecumenical Patriarch Bartholomew, and Justin Welby, Archbishop of Canterbury, were among the prophetic faith leaders who signed the urgent appeal.

“Future generations will never forgive us if we miss the opportunity to protect our common home. We have inherited a garden; we must not leave a desert for our children,” the joint appeal stated.

“We plead with the international community gathered at COP26… to safeguard, restore, and heal our wounded humanity and the home entrusted to our stewardship.”

Faith leaders from other Christian faiths and Islam, Judaism, Hinduism, Buddhism, among others, signed the joint appeal, which was then handed to Alok Sharma, the President of COP26.

“Today shows us how we can and will turn the tide,” Sharma said, calling the appeal a “powerful call to action for the world.”

We thank our Creator God for this blessed season and for once again uniting the Christian community to care for our common home. We ask for God’s forgiveness in where we have fallen short as too many members of God’s creation suffer needlessly because of the climate emergency and ecological crisis.