Even Assisi – the city that first heard a man pronounce the expression “Laudato si ‘mi Signore” eight centuries ago – celebrates the Season of Creation with a full program of events that involve all the ecclesial and social lives and activities of the city. The calendar for the whole month, disseminated through the Diocese of Assisi, involves other local Dioceses too  such as Foligno and Gubbio. There is huge participation from the Franciscan families to the Sentiero di Francesco and the Laudato Si ‘Circles of the Region, from Catholic organizations and schools, up to Economy of Francesco culminating with the presence of the Holy Father on 24 September.

After the opening event of the Season of Creation on September 1st which involved the Sentiero di Francesco and saw the inauguration of the Burning Bush (which is animated every day until 4 October by the Laudato SI ‘Circle of Assisi) on the lawn in front of the Basilica of St.Francis. On September 2nd, the important event  “Il Cortile di Francesco” began. This event takes place every year since 2011, in the city of the Poverello. It was initially named “the Courtyard of the Gentiles” (“il Cortile dei Gentili) by  Cardinal Ravasi, president of the Pontifical Council for Culture but since 2012 it has been known as “the Courtyard of Francis” (“il  Cortile di Francesco”) a name chosen by the Franciscan Community of the Sacred Convent of Assisi. It is a meeting place for believers and non-believers who question themselves and each other about the world recognizing reciprocally different origins and starting points.

The choice of theme for the eighth edition of  “il Cortile di Francesco” is “The Eternal and the Present time” and it is a conscious declaration of outdatedness. Why speak of Eternal in the present time so marked by the weight of such shocking events? Why talk about something so abstract, so far from a reality which is so overburdened with survival urgencies? In this sense, therefore, the Eternal is not only beyond time (which for the believer takes the form of faith and the divine) but it is also the more secular dimension of a thought that seeks to question existence starting from its “theoretical” dimension, that is, from the position of those who try to trace causes and relationships, relationships and dependencies in the things and ways of the world. 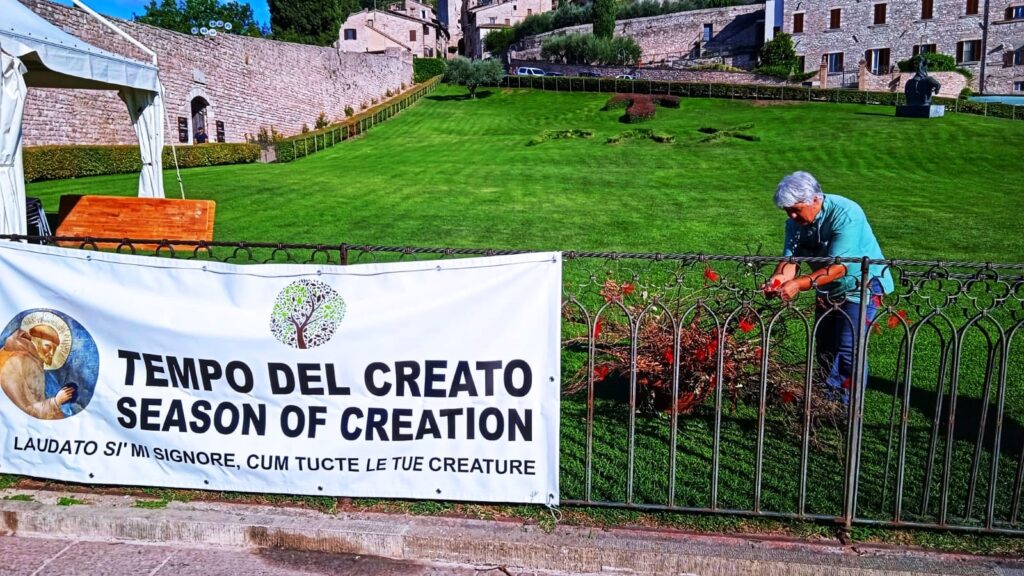 Regarding this issue, in the busy calendar of events that ended on September 4th, there were exponents of Italian politics and economics, bishops (including the president of the CEI, Cardinal Matteo Zuppi) scientists, journalists, historians, philosophers, climatologists and theologians. There was also important space given to art, dance, cinema and music. In this event, the Laudato Si ‘Movement was involved in two initiatives in particular: The animation of the Burning Bush which took place on the lawn of the Basilica  San Francesco and the presentation of the book “Vivi Laudato Si” in the press room.

The new edition of “Vivi Laudato Si”  written by Antonio Caschetto and published by the Italian Franciscan Editions on September 1st, the World Day of Prayer for the Care of Creation. It was conceived as a practical guide for all those who wish to re-propose, within their own community and organization, dynamics of prayer that arise from ecospirituality. Along with the analysis of the Canticle of the Creatures and the references of the Encyclical which were already present in the first edition of 2019,  some new aids for running Retreats and for the Laudato Si ‘Chaplet were added. There is also the history of the Movement in particular the synodal process which led to the change of the name.

It was a great joy to be part of this experience  listening to shared voices as is the style of the Laudato Si ‘Movement. Introduced by Br. Giulio Cesareo (communications director of the Sacred Convent of Assisi) we were welcomed in the courtyard by the community of friars. Father Joshtrom Isaac Kureethadam (Coordinator of “Ecology and Creation”in the Dicastery for Promoting Integral Human Development) who edited the preface of the book, drew a clear line under the meaning of our living in creation while taking stock of the commitment of the Catholic Church towards an integral ecology. Matteo Manicardi  (Singer/Songwriter and Laudato Si’ Animator) interspersed Father Josh’s profound reflections with the songs he composed to raise awareness on the theme of listening to the cry of the earth and the poor.

The interventions of the audience present in the room also enriched the presentation, tracing a style and a path that is carried out daily by the Laudato Si ‘Movement network in Italy. Experiences of ecological conversion, community involvement, doubts and questions about the effectiveness of our action were shared. A mosaic of voices, not a collage, which in a short time allowed us to understand how each of us can respond with our own talents – such as theology, commitment to the church, music, openness to others- to the invitation to “Vivi Laudato Si”! 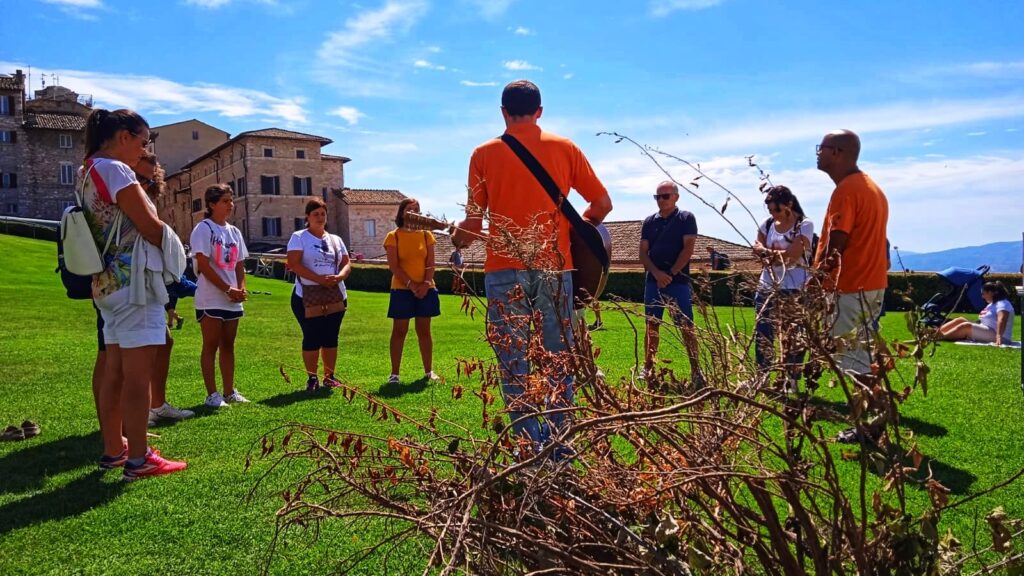