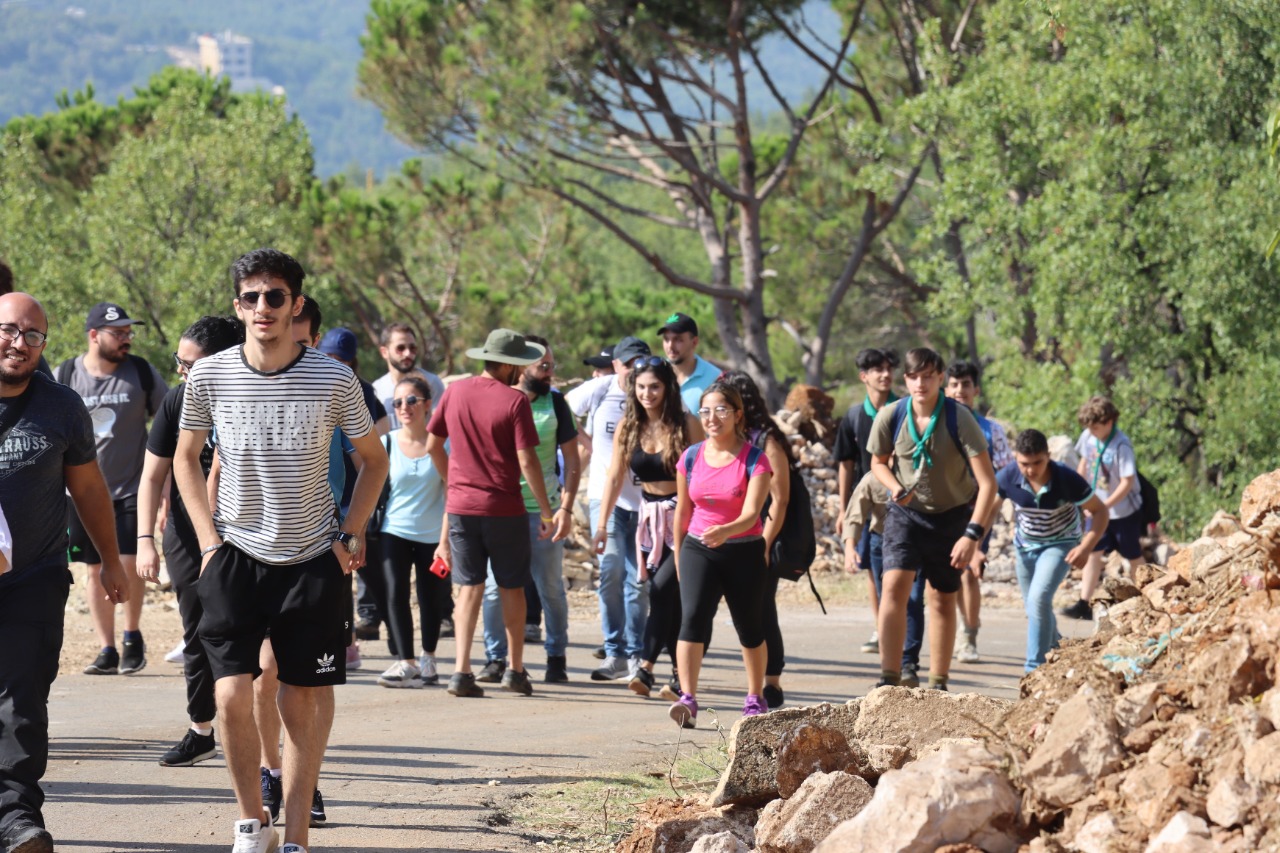 From the North and South of Lebanon, young people woke up early with enthusiasm and were ready for their activity. They had one goal: listen to the voice of creation. Youth women and men, from different Church families and youth movements in Lebanon, headed together to the Lebanese region of Kfardebian in Keserwan, on the morning of Saturday 3 September 2022. They participated in a youth environmental activity organized by the Middle East Council of Churches, in partnership with “Danmission” organization, and were accompanied by a group of clergy. In kfardebian, they met with nature, and inaugurated the series of celebrations that will be held in many countries of the Middle East for this year, on the occasion of the international “Season of Creation” launching.

The slogan of the activity was “We Walk and Listen to the Voice of Creation!”. The program included many environmental youth segments, but most importantly it motivated the participants to look deep into nature with all their senses and discover the richness of the Lord’s Gifts. In fact, the youth stressed the need to listen to the creation and save it from danger. They raised their voices and emphasized that we live in a common home and it is our responsibility to protect it.

“Season of Creation” in Kfardebian, Lebanon

The activity started by introducing the participants to the Middle East Council of Churches and its mission, especially its environmental programs. As well as, the theme of this year season “Listen to the Voice of Creation” and its slogan “the Burning Bush” were also explained. Noting that the international “Season of Creation” starts on 1 September and ends on 4 October of each year.

Then, the youth began their hike in the bosom of the nature of Kfardebian, which is one of the biggest Lebanese villages in Keserwan. They were accompanied by a guide who presented an overview of the region and its characteristics. Participants enjoyed the walk and discovered many aspects of nature which reflect the beauty of God’s Creation. They discussed together, exchanged experiences, and made beautiful environmental memories, away from the city and the stress of daily life.

In the first segment, an ecumenical prayer was held with the participating clergy from different Church families. Participants glorified God of our vibrant world, proclaiming “O Lord, help us listen as You do, and help us respond to You!” They all gathered under the various trees and prayed together, thanking God for all His Creation. “Listen to creation tell of God, listen to God’s Word in scripture.”

All the participating youth movements and groups, read, each one in turn, prayers from the “Season of Creation” 2022 international booklet, which was translated into Arabic by MECC for the second consecutive year. Prayers included the Psalm of Creation, and the Litany of lament and repentance, through which we ask God for forgiveness, since we didn’t fulfill the responsibility of taking care of each other and our creation. This is in addition to the Repentance and Intercessory Prayers, through which we ask God to give us strength in being responsible and responding to His call…

The youth also presented various chants and hymns related to creation, each one according to its Ecclesiastical rites. So the participants got involved in the traditions of the various Church families, during a time of prayer and reconciliation with oneself, the other, and creation, from the heart of nature to the heart of God.

As well as, the Biblical Text Exodus 3:1-12, which is available in the “Season of Creation” 2022 booklet, was read. Then, the Coordinator of the MECC Ecojustice Unit Reverend Dr. Rima Nasrallah, presented a reflection on the story of Moses and the burning bush. In this context, she also indicated that the earth is sacred, emphasizing that God is with us and will not leave us, but we have to make small initiatives towards protecting our land and all the creation. Hence, Rev. Rima called everyone to listen to the voice of creation and the voice of God who speaks through creation.

The Middle East Council of Churches’ team prepared a gift for the participating youth as a souvenir from this Christian environmental celebration. It is a customized metal water bottle designed with the logo of the “Season of Creation” 2022. Therefore, the water was blessed through a special prayer. Moreover, the MECC team stressed the need to reduce the use of plastic materials and emphasized the importance of sorting and recycling process.

In a creative segment, each participant wrote his name on a piece of orange and yellow cardboards, as the colors of the burning fire. Then, these pieces were put one next to the other, in a way that symbolizes the burning bush. Through this segment, MECC wanted to prepare a piece of art as a memory from this youth environmental activity.

Afterwards, the youth continued their activity, and the program also included a session for apple picking during which participants learned guidelines on good harvesting. The youth also learned in another session how to make apple cider vinegar.

As well as, the activity included an environmental game. Participants were divided into groups which were named according to the four elements of nature, earth, water, air and fire. Each team has to collect 10 types of small plants which names were mentioned in some Bible verses distributed to the participants. The game aimed at contacting with nature and learning about its various elements, as well as strengthening team spirit and building bridges between all participants.

At the end, participants gathered for lunch, during which they exchanged their opinions, experiences and traditions. It was a time for bridging distances between them and an opportunity to create new friendships from different Church families, and thus an eastern ecumenical youth family. In fact, positive feedbacks were received as the activity was full of hope and joy. The youth expressed their happiness and wished to participate in such other new activities. They all stressed the importance of working together towards a clean environment and a better future.

The Middle East Council of Churches