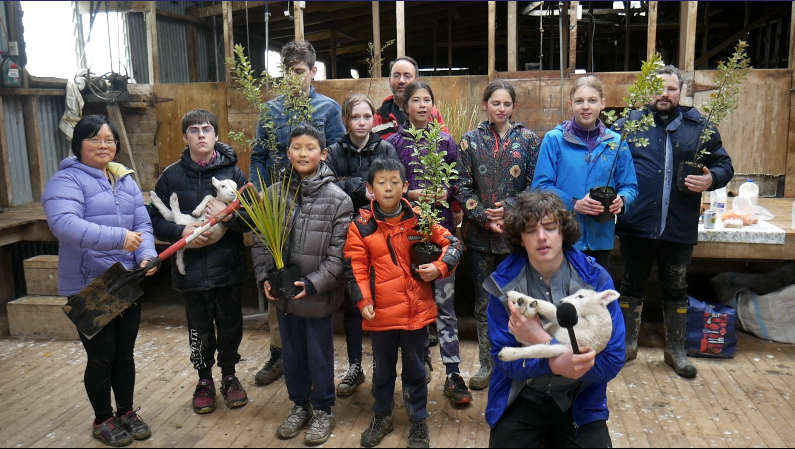 All Saints’ Anglican Church Dunedin North parish set out to plant 60 trees on the farm of Bill and Debbie Paterson in Waipihi, near Gore. We planted tussock grown from seed or native plants found on the property and propagated at a local nursery, pittosporum which are a local native species, and some southern beech trees also native to the area. The planting was along the sides of a waterway and up the sides of a gully that leads to it. The area is fenced. The trees were protected by woollen weed matting and temporary plastic sleeves and netting held by four bamboo poles.
Five adults and eight children from the church planted the trees over a three hour period – in freezing rain for some of the time, but it didn’t snow.
Spring lambs were a bonus for the city children to play with at the end of their work.
The children and youth heard about the Anglican Communion Forest and the 2022 World Council of Churches Assembly happening in Karlsruhe this week, especially about the Season of Creation and the work of Water for Life. Vicar of Dunedin North Rev Michael Wallace showed the group a short video from the WCC Assembly of the Ecumenical Patriarch of Constantinople, Bartholomew I speaking about the importance of Caring for Creation.