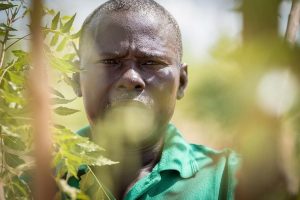 Ayuba Tada, a Nigerian refugee, serves his second year as a nursery gardener in one of 20 so-called ‘green spaces’ in and around the Minawao camp for Nigerian refugees. A five-year planting and harvest cycle of trees ensures wood to be used as firewood, vines for building of roofs, and a step in alleviating environmental impact in and around Minawao. Photo: LWF/Albin Hillert

(LWI) – What once was brown, now is green. In a few years, The Lutheran World Federation (LWF) has transformed a region around the Minawao refugee camp in the far North of Cameroon from a dusty desert to a young forest. At the same time, the LWF project improved the relationship between refugees and host community, provided new livelihoods and ensured better protection for women and girls.

Cameroon’s far north region has a very harsh climate with little natural resources. Rivers dry up during the summer months and planting and harvesting is difficult. 95% of the people living in the far north region cook and heat with firewood.

When Nigerian refugees fleeing Boko Haram arrived in the Minawao region, the pressure on those resources increased. The Minawao refugee camp, with 58,000 inhabitants, is a city of its own. The bush land within a radius of about 18 kilometers had been cut down. When wood became scarce, refugees had to buy it, often with the only thing they had to sell: Food rations they had been given by the UN.

Green space N 1: One of 26 so-called ‘green spaces’ in and around the Minawao camp for Nigerian refugees. Photo: LWF/ N. Toukap Justin

“A number of households were forced to sell a portion of their food ration to buy firewood,” says Philbert Habonimana, LWF country representative in Cameroon. In addition, women were forced to walk long distances in search of firewood which exposed them to the risk of violence and sexual assault,” he adds.

The situation also increased tension between the refugees and their host communities. “Before the Nigerian refugees arrived in Minawao, we had enough firewood and you couldn’t see anyone within 100 meters. But since their arrival, everything has been destroyed. Our environment is treeless for miles,” said Boubakar Ousmary, general secretary of the canton of Gawar, bordering the camp. Haman Adama, head of the canton of Zamay, added that the already problematic deforestation increased with the large camp being set up in the region. 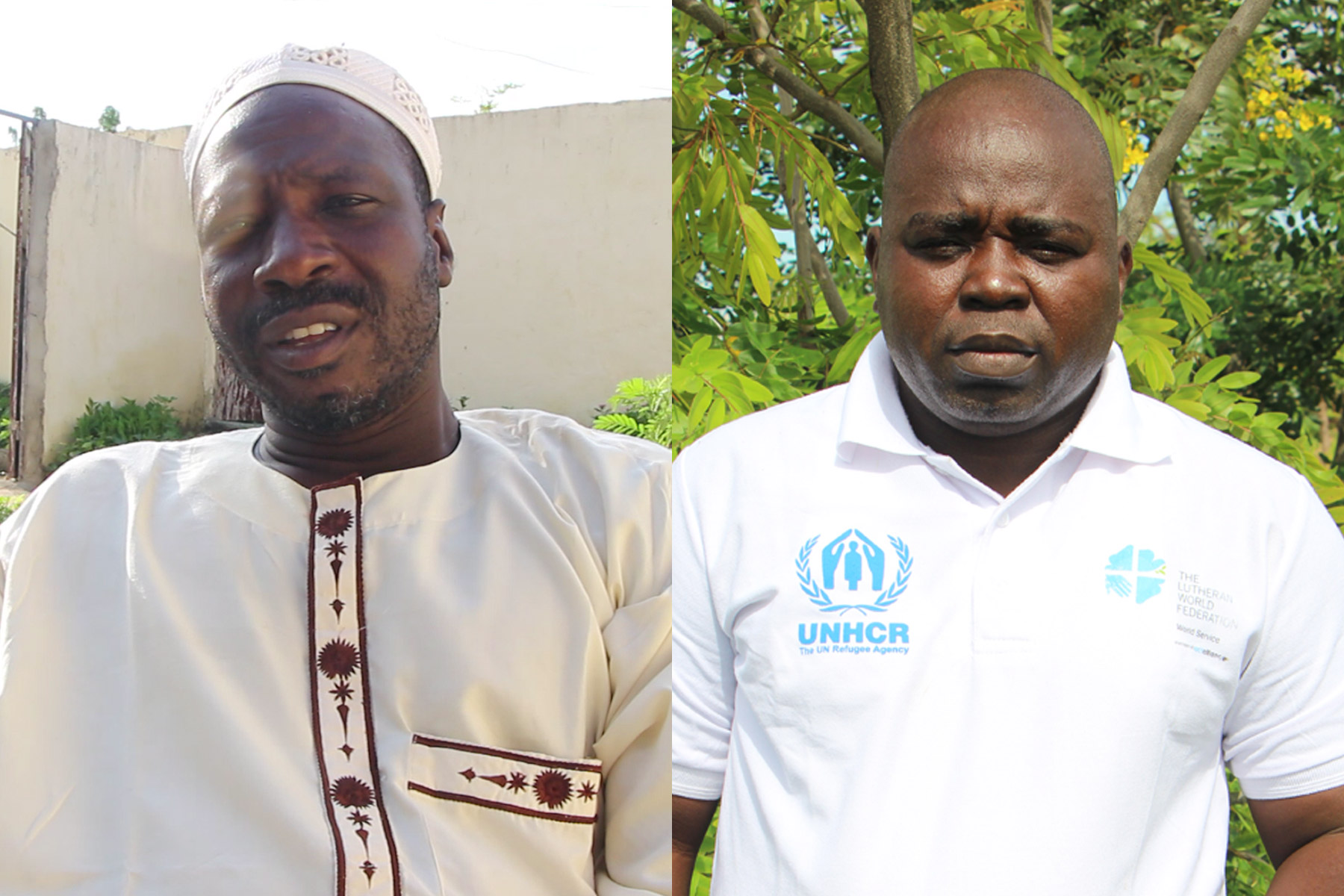 LWF tackled the problem from two ends. Always working with refugees and hosts, LWF combined protection of the environment with the promotion of renewable energies. Since 2017, LWF has grown trees in nurseries and re-forested a total of 119 hectares. In addition, LWF distributes fruit trees to refugee and host community households, the administration of the camp, schools, mosques and churches. 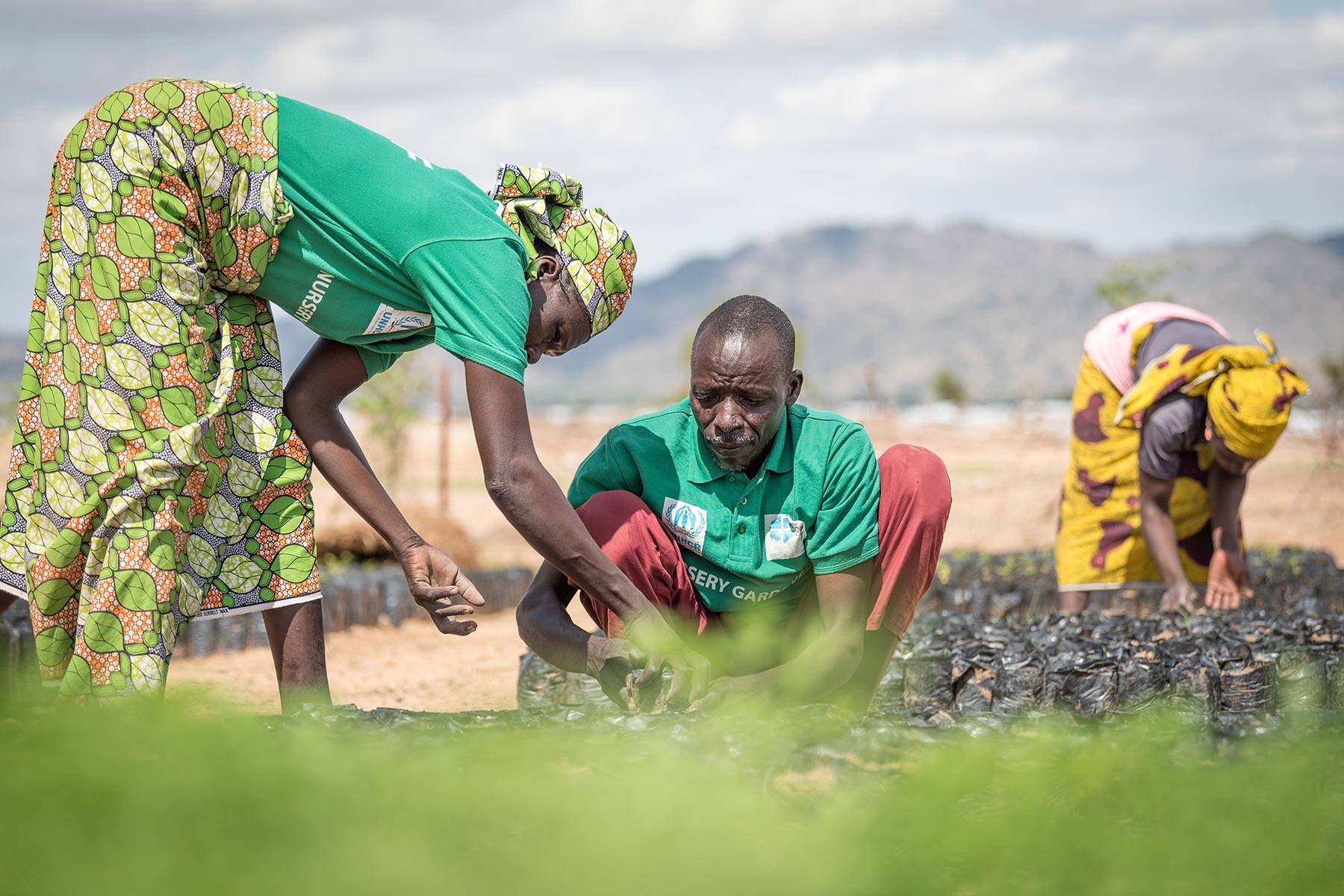 A group of nursery gardeners, themselves Nigerian refugees, work in a tree nursery in the Minawao camp. Planted across 26 so-called ‘green spaces’, a five-year planting and harvest cycle ensures material to be used as firewood, vines for building of roofs, and a step in alleviating environmental impact in and around Minawao. Photo: LWF/Albin Hillert

Now, four years later, more than 300,000 trees have been planted. The average survival rate of trees in green spaces has been estimated at 90%. These trees provide shade, break the wind and reduce erosion. After two years, people can harvest the first fruit. After three years, the trees are big enough to be pruned for firewood.

To make sure the new forest is not cut down immediately, LWF promotes alternative energy sources. Since 2017, the LWF has set up production of energy-efficient stoves, and two centers for ecological charcoal production. To facilitate their access to organic material, the environment project partnered with the Water, Sanitation and Hygiene provision.

The households in the camp send their household waste to the charcoal center where it is transformed into coal which they can use. To this day, LWF has trained more than 5,000 households in the production of ecological charcoal and distributed 11,460 energy-efficient stoves.

Investing in more sustainable energy sources has also created livelihoods: 300 people work in the production of charcoal and stoves in the production centers, the majority of them women. Having their own income has and empowered them and improved their positions in the families. 5,500 households have been trained to produce charcoal. Since charcoal became the main source for fuel, women and girls are sent on fewer trips to collect firewood And the young girls have more time available to study for school. 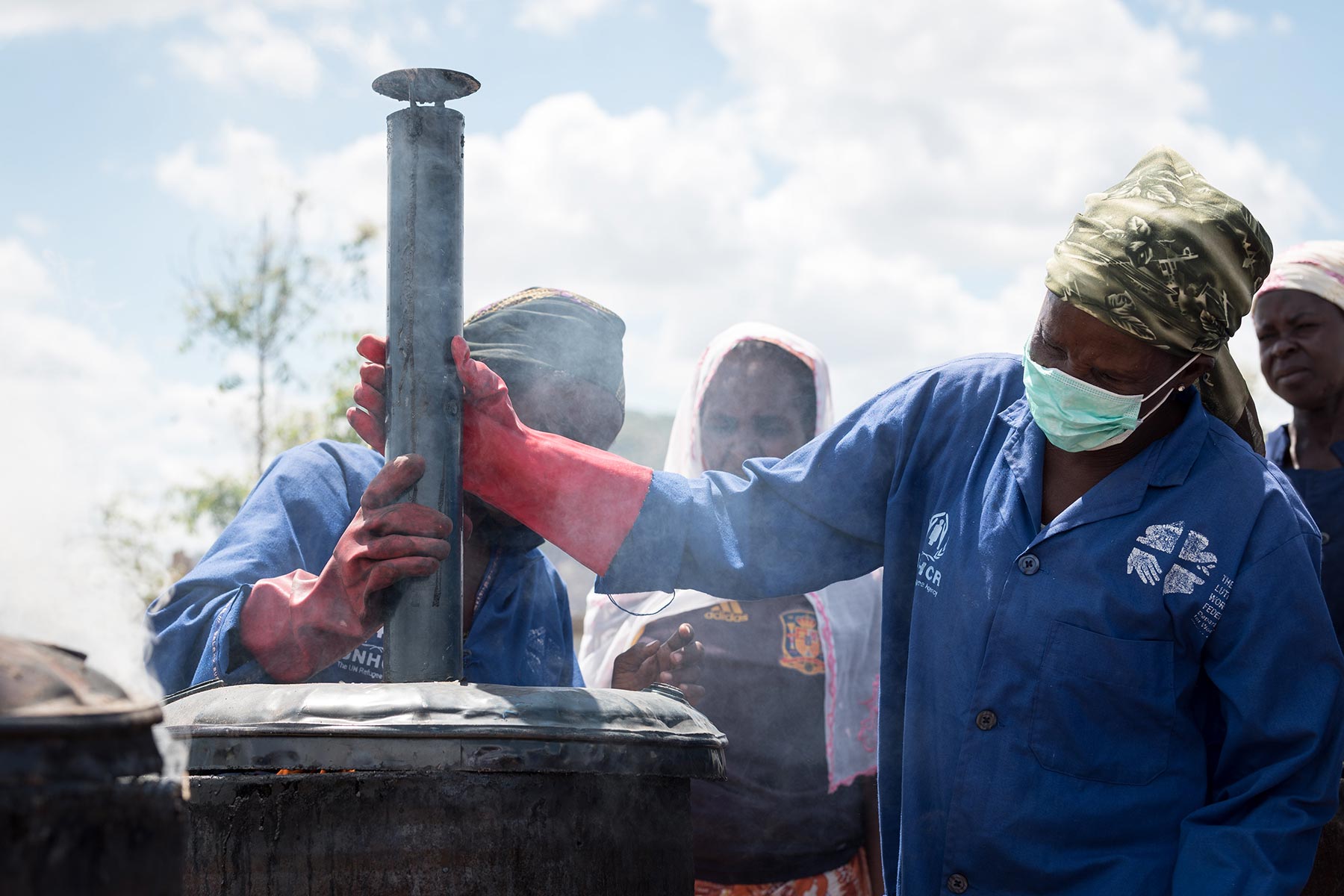 Aisha Bukar (left) and Hawa Harona (right) mount the lid onto a metal container in which biomass is burnt, in preparation to become charcoal. With the support from the LWF World Service, the full process from waste to charcoal is managed and run by the refugees themselves. Photo: LWF/ Albin Hillert

The project has also reduced tensions between refugees and hosts. “The communities are working together, to protect the environment,” says LWF country representative Habonimana.

The communities are now working together, to protect the environment,

“Everywhere we lookis green now,” says Luka Isaac, president of the Nigerian refugees in Minawao. “The trees have grown, we have shade and we will have enough trees to make our environment beautiful and healthy. Before, the air was very dusty. Now the air we breathe is very good. Today, Minawao is very green.”

The project has been funded by UNHCR, Land Life Company and Kerk In Actie as part of environmental protection activities in the camp and its surroundings.

You too can help us plant trees in Cameroon: For 50 USD, we can plant 13 trees, and care for them for three years. Please donate.

Many churches in the ecumenical family observe the “Season of Creation” (also known as Creation Time) between 1 September and 4 October, the Feast of St Francis of Assisi, as observed by some Western traditions. For the Lutheran communion, this liturgical season of prayer and action is an opportunity to affirm LWF’s commitment to address a central crisis of our time – climate change. “Jubilee for the Earth” is the 2020 theme for the “Season of Creation”.

JUBILEE FOR THE EARTH: SEASON OF CREATION 2020 CELEBRATION GUIDE