Despite the EU resolution, the EACOP project continues and threatens biodiversity in Uganda and the greater Africa 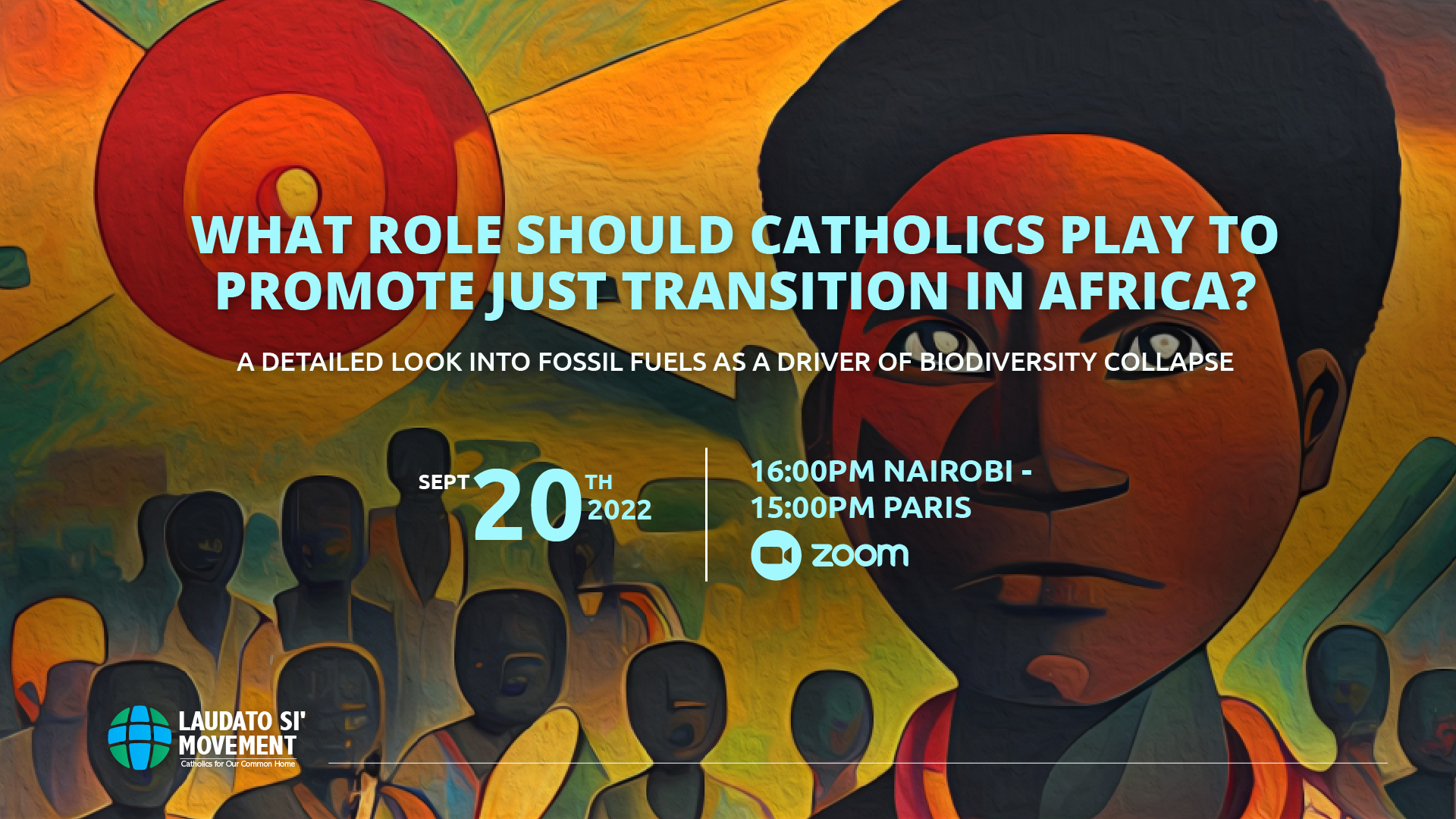 In line with this year’s Season of Creation theme, “Listening to the voice of creation”, and the symbol, the burning bush, a group of African animators participated an online Season of Creation event that sought to ask, “What role should Catholics play in ending biodiversity collapse by transitioning from fossil fuels?“, on September 20th.

The webinar sought to understand in a broader context how Catholics can protect biodiversity through both sustainable and advocacy tools. As people of faith, we have a moral duty to protect creation.

Khaduyu Michael, a Policy Expert with the Africa Group of Negotiating experts, remarked:

“Biodiversity touches every space that God created for us. Pope Francis said that 80% of natural resources are consumed by only 20% of the world’s population. Leaving out 80% of the population to scramble very limited resources.”

There is a need for all states to have legally binding treaties that have a dispute mechanism to ensure that countries no longer misuse resources. This instrument should ensure that there are implications of failure to meet climate change commitments on an international level.

The global south remains to face dire impacts brought about by the climatic crisis without the much-needed resources to combat these effects. Sr. Odiira Nabasa, a Ugandan medical mission sister, shared about sustainable agriculture and how her congregation innovates unique ways of having food security in her community despite the challenging economic and climatic conditions.

Through sustainable agriculture, their small community has generated economic impact and preserved biodiversity, and they continue to educate young children in the community.

Coupled with the pipeline, the communities in the area face evictions and more serious human rights violations. He cited that the people of Masaka have little knowledge of legal framework to protect the region’s biodiversity and therefore do not know their rights and obligations towards the biodiversity commitment. He noted that language is a barrier preventing the locals from understanding legal texts, which are available in limited languages.

John Hillary, LSM Uganda chapter leader, noted that indigenous people are left behind in the conversation about the pipeline’s impacts, the first oil rig arrived in Uganda, and many CSOs are speaking. Still, the individuals are yet to be educated about the pipeline’s negative impacts. There is a need to strengthen the partnerships to combat the project and amplify the voice of the voiceless to raise awareness that the pipeline will come at a considerable cost in biodiversity loss and irreversible climate damage should it be operational.

In summation, the discourse amplified the plight of the earth and the most vulnerable by sharing already existing impacts of biodiversity collapse and started channeling solutions like leveraging the Healthy Planet Healthy People petition and The Letter to the CBD Executive Secretary about this climate crisis.

No More Biodiversity Collapse in the Francophone region 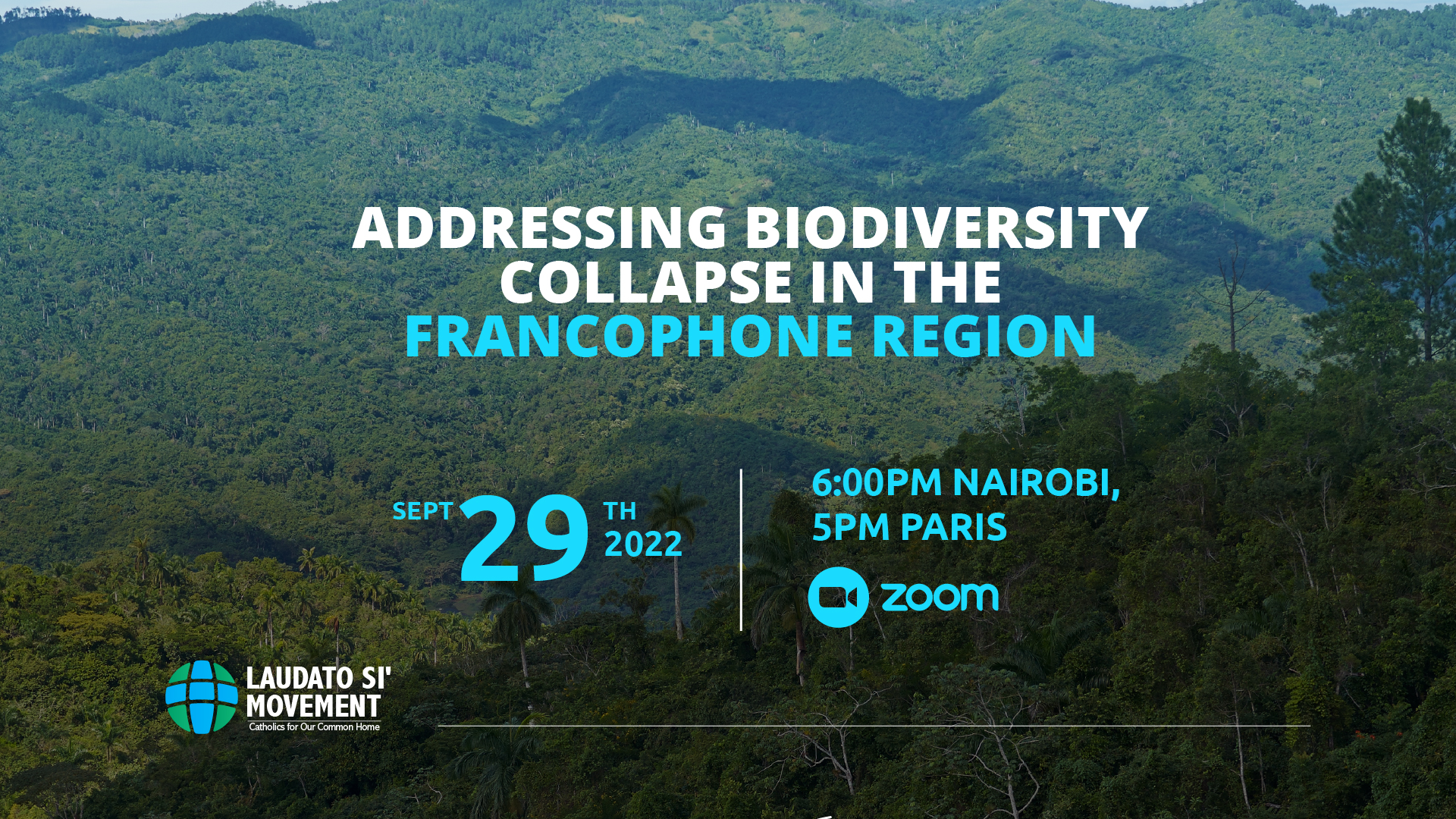 On September 29th, Laudato Si’ Movement through the Francophone region in collaboration with the Advocacy team organized a webinar calling for No More Biodiversity Collapse. Ahead of COP15, amplify the need to hear the cry of the earth and  the cry of the poor, and that the Post 2020 Global Biodiversity Framework should inspire action against all drivers of biodiversity loss.

It should serve as a universal framework for action by all governments and stakeholders from all sectors and equally serve as a document that fosters cooperation and integrated approaches.

The webinar was conducted in French and interpreted in English to give a chance to all participants from Anglophone Africa to be part of the discussion. The speakers and panelists tackled the biodiversity challenges from different angles and the role Catholic Church in protecting  biodiversity.

Two main speakers shed light on the topic of the day. Henry Muhia from REBAC in DRC raised the current situation of Biodiversity in Congo Basin, the involvement of Government and the place of each individual. Anne Doutriaux from Laudato Si Movement, gave the Biodiversity approach by Pope Francis in the Laudato Si’ encyclical.

It opened a deep conversation on stories of change by our Laudato Si’ Animators in some communities in DRC, the impacts and especially the place of indigenous communities.

The webinar was interesting to see participants in Europe speaking on a matter in Africa and Africans speaking on a global issue. This was a concrete response to the Call by Pope Francis for a Global Dialogue for our Common Home. Find here the complete webinar.