Africa’s youth to advocate for a better and cleaner future 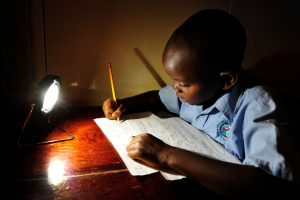 A young boy in Zambia does his homework by a solar-powered lamp. Photo by Patrick Bentley/SolarAid

But the powerful and inspirational climate strikes led by youth throughout the world in recent years have been particularly hit hard by efforts to slow the spread of the coronavirus.

The Fridays For Future global climate strike movement, led by international activist Greta Thunberg, has had to move online, and generally speaking, youth in some parts of the world have had fewer chances to voice their demands for a cleaner future.

Justice, Peace and Integrity of Creation Franciscan Africa (JPIC-FA), along with other organizations, will work to change that during the Season of Creation, the annual ecumenical celebration of prayer and action for our common home, which started 1 September and concludes 4 October.

Organizations and people representing Bahá’í, Catholic, Christian, Hare Krishna, and Muslim faiths throughout the continent and the world will host and participate in the “Interfaith Youth Green Festival,” a webinar that will feature youth voicing their worries and hopes for the future.

“We want to give a platform for young children in different schools who have been very active in climate strikes,” said Steeven Kezamutima, a regional manager for JPIC-FA.

“We want to give them the opportunity and power to own the event.”

A growing number of youth leaders from Kenya, Uganda, Tanzania, and potentially Europe and the U.S. will speak during the webinar. The youth range in age from 7 to 15 and will share moving messages that will inspire further participation amongst their peers and adults.

Organizers also will make time for an online climate strike. Participants will chant and shout as if they’re at an outdoor strike, giving them the opportunity to express themselves despite varying limitations on in-person gatherings around the world.

“They want to speak about how it is important for them to strike . . . about their future, why it’s important,” Kezamutima said.

The attention on the continent comes at a vital time for clean energy in the region.

On Thursday 10 September, in the second of four Season of Creation webinars, Mohamed Adow, the director and founder of Power Shift Africa, and Thuli Brilliance Makama, Oil Change International’s Senior Advisor for Africa, will discuss the challenges and opportunities awaiting the entire continent of Africa as it further considers the morality of investing in fossil fuels.

The webinar will be held in English and simultaneously interpreted to French, Spanish, Italian, Polish and Portuguese, all free of cost.

Learn more about renewable energy in Africa by attending the webinar, “Refuelling Africa through Ethical Investment.” Click here to register.

In July, a petition with thousands of signatures was delivered to Standard Bank, telling them not to finance the proposed East African Crude Oil Pipeline (EACOP), which would run 1,445 kilometers, from Uganda to the port of Tanga in Tanzania.

If built, this pipeline would have devastating effects on the surrounding communities and ecosystem.

“Governments should know that these children are not quiet and sleeping; they are more vigilant than ever before,” Kezamutima said.