In London, ‘standing up for God’s creation’ means acting with courage for climate justice 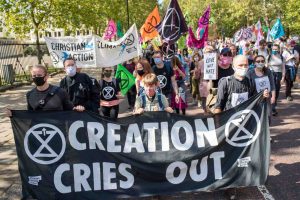 As the ecumenical family celebrates Season of Creation, churches across the world are showing their strong passion for climate justice and caring for the Earth. In London, this passion has been in evidence this week as church leaders and lay people joined marches, peacefully advocating for change even despite the threat of being arrested.

Members of an ecumenical group of Christians in London, Christian Climate Action, were arrested this week as they demanded urgent action on climate change. They were part of a group of more than 160 who were arrested during the “Extinction Rebellion,” a movement in London and Manchester that is urging the government to address the climate crisis—now.

Campaigners were arrested when they blocked traffic around Parliament in central London. Pastors and lay people represented the face of the church as they prayed, marched, and meditated.

The Rt Rev. Dr Rowan Williams (right) joined a protest march and sat with a group in prayer and meditation in Parliament square. Photo: Sean Hawkey/WCC

Taking part in the demonstrations, Rev. Aaron Kennedy from St Mary’s, Battersea, said that “Christians ought to be standing up for God’s creation and for the welfare of future generations of human beings and other creatures.” Photo: Sean Hawkey/WCC

Buddhists and Christians sat to pray and meditate in front of a cordon of police in Parliament Square during Extinction Rebellion demonstrations. Photo: Sean Hawkey/WCC

A group of participants in Christian Climate Action pray during a civil disobedience protest in Parliament Square in London. Several people in the photograph were later arrested. Photo: Sean Hawkey/WCC

“Seraphim of Zimbabwe: During Season of Creation, ‘we give back to God everything that he has given to us’ ” – WCC interview (29 August 2020)

Learn more about Season of Creation 2020