What special gift did Pope Francis receive to start the Season of Creation? 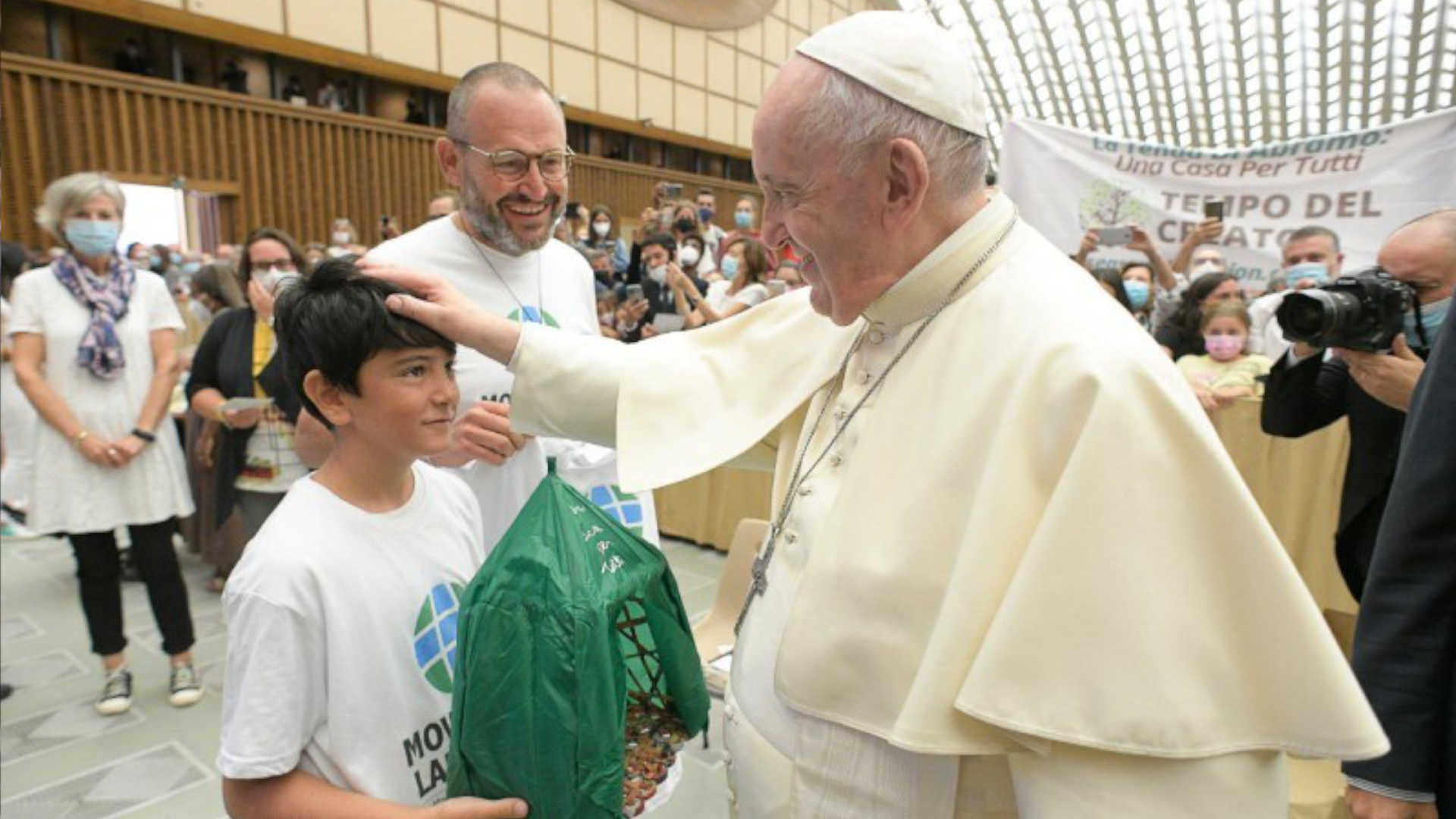 Pope Francis receives the gift of a tent to start the Season of Creation. Photo credit: Vatican News.

What better way to start the Season of Creation than by offering Pope Francis a special gift.

More than 100 Laudato Si’ Animators from Italy gave His Holiness a handmade “Abraham’s tent” on Wednesday, the World Day of Prayer for the Care of Creation, which marks the start of the ecumenical Season of Creation.

Following Pope Francis’ General Audience, the Animators gifted Pope Francis the tent, which is the symbol of the 2021 Season of Creation, as communities around the world are uniting around the season’s theme, “A home for all? Renewing the Oikos of God.”

The Animators wanted to show His Holiness how Laudato Si’ Movement and countless communities around the world are caring for our common home, biodiversity, and all members of God’s creation during the Season of Creation, which ends 4 October, the Feast Day of St. Francis of Assisi.

The Animators also wanted to express their hope for a society that becomes more attentive to others and all members of God’s creation. Because, as Pope Francis has reminded us, “You will build the future, with your hands, with your heart, with your love, with your passions, with your dreams. Together with others.”

All Christians are encouraged to pitch an Abraham’s tent as a way of “creating a home for all” during the Season of Creation. Communities are invited to place a tent in their church garden or green space as a way of showing that their community welcomes the most vulnerable and the marginalized and gives them shelter, protection, and care.

Here is how Laudato Si’ Movement Filipinas expresses their solidarity with the most vulnerable.

Pope Francis’ tent was built by Calabrian Laudato Si’ Animator Daniela Manna and members of her arbresh community in Civita, in the province of Cosenza.

The town was founded in the 15th century by Albanian refugees forced to leave their homeland and now welcomes refugees and asylum seekers.

Daniela and others led by example by reusing materials to create the tent. They used newspapers that were ready to be discarded and repurposed straws and an old umbrella. Vinyl glue, hot glue, a ruler, and a skewer helped them finish Pope Francis’ gift.

During the General Audience, Pope Francis also repeated his call for all to celebrate the Season of Creation: “Today we celebrate the World Day of Prayer for Creation and the beginning of the Season of Creation, which will conclude on 4 October, the Feast of St. Francis. This worldwide celebration, which has as its theme, ‘A home for all? Renewing the Oikos of God,’ is an opportunity to join with our brothers and sisters of the various Christian denominations to pray and act together for our common home in these times of grave planetary crisis.

“Therefore, together with the promoters of the initiative, the Dicastery for Promoting Integral Human Development, the World Council of Churches, the Laudato Si’ Movement, and many other promoters who animate this wonderful celebration, I invite everyone to participate.”

WATCH: Pope Francis invites you to celebrate the Season of Creation during Wednesday’s General Audience